Q: Are there certain songs that inspired you while writing The Boy? Do you have different playlists for different books?

A: It depends on the book and the setting, but I usually do have something of a playlist, a soundtrack for the story. For the books set in South Louisiana, that’s a must. Music is a part of the place, a part of the culture–from the traditional Cajun music of Beausoleil to the Zydeco music of Zachary Richard to the soulful country-blues sound of Marc Broussard. The music is part of the rich atmosphere of the area and the soul of the people there.

Q: Which character in The Boy would you say most resembles you and why? (Was the resemblance intentional or unintentional?)

Annie Broussard. My heroines and I spend a lot of time together in my head, so they have to be women I can relate to on some level, women I would be friends with in real life. Annie is very down-to-earth, just a normal woman trying to juggle all the aspects of her life–work, motherhood, her relationship with her husband. She’s a small town girl–we have that in common. And she has the courage of her convictions. I admire that. I love that while everyone else is terrified of Nick, Annie has always stood up to him, and he loves her for that.

Q: How do you like to work? Do you have a schedule, or is it more of a mood that dictates your writing habits?

A: I have to work my way into the story, so at the beginning I’ll work a few hours then leave it be, think about it, come back and tinker with it until I have more of a feel for it. Once I find my rhythm, the hours become longer and longer, and I tune out other aspects of my life. The book becomes all-consuming.

Q: What shows do you like to watch? Are you a fan of television crime shows? British or American? Does television ever inspire events in your novels?

A: I don’t watch any American crime fiction on network TV. I know too much about how a real investigation works, and most of the cop shows here bear little resemblance to reality. That bothers me. I work really hard to try to accurately portray the jobs and the people I write about, so that’s what I want to see. I’m a political junkie, so I watch a lot of news, but I also watch true crime shows for research and inspiration. I also like some British crime shows, which tend to be more character based than action based. Nobody solving crimes with holograms and crazy nonsense like that. My current favorites are Shetland and Vera. I’ve only just discovered Netflix, and I’m finding some good shows there, as well.

Q: What is the research process like when it comes to writing a book that deals so much with police work/criminal behavior?

A: I’ve been at this for a long time, so I have a good grasp of how to run a homicide investigation. I’ve done loads of research over the years, including a lot of hands-on research with people in all aspects of law enforcement, from homicide detectives to sex crimes detectives to FBI agents, forensic psychologists, ballistics experts, blood evidence experts. I’ve driven police cars, shot all manner of weapons, discussed cases with profilers. Every summer I go to a police academy conference specifically for crime writers where we take the same courses as the professionals, taught by their instructors. It all adds to the realism of the story.

Q: What space in your home is the best reflection of your personality, and why? Where are you most comfortable writing? Please describe that space so we can picture it.

A: I live alone with my dog, so every part of my home reflects who I am and what I like. I surround myself with art and with things I’ve collected. I’m a nester, so I like to work in my office where I’m surrounded by books and everything I might need. Last fall I was displaced from my home by a massive wildfire. My neighbor’s house burned to the ground. My house had extensive smoke damage, and part of the process of restoration is having literally everything you own taken away to be cleaned, which takes months. It seemed the perfect time to do a bit of remodeling, so I had a cabinet maker come in and do my office. He built a huge wall of cupboards with open bookcases above that go nearly to the ceiling, very traditional in style in a clean soft white. He also did matching built-in cabinets flanking the fireplace which has a white stone French art nouveau-style mantel. Above the mantel is a five-foot tall painting of one of my horses, Feliki. She was a fierce competitor. Now she keeps an eagle eye on me as I work. No slacking with Feliki watching! One end of the room is a unique curved bay of floor-to-ceiling windows and a door that leads out to the patio and the pool, and beyond the pool is woods. My house is built on a hillside, so I’m at canopy level of the trees. It’s a very private, peaceful property. I have two big, plush wing chairs that sit in that alcove beyond my desk, and this is where my cocker spaniel, Miss Molly, hangs out while I work. It’s a very lovely, calm, space. 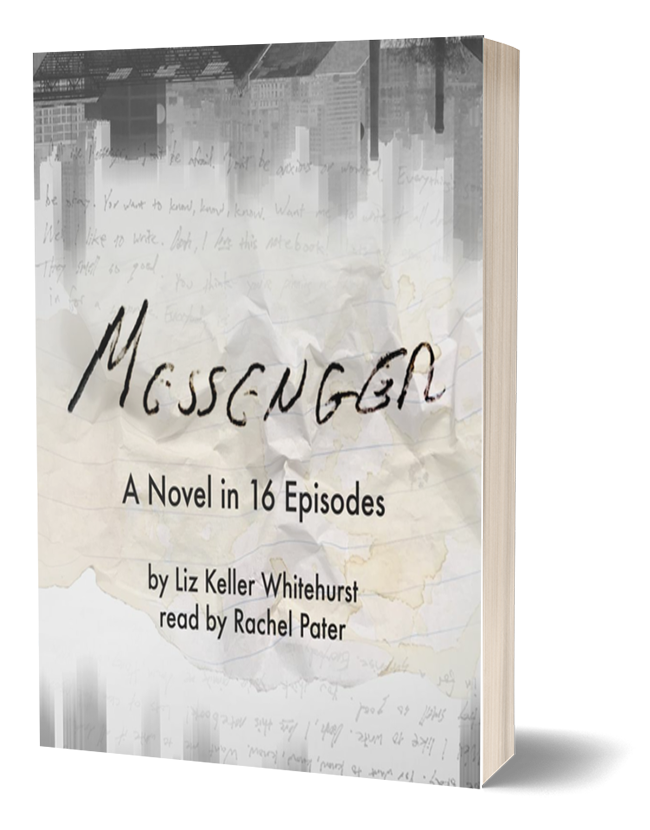 Sign up to receive “The Recliner,” an unpublished short story by Liz, which is an early precursor of MESSENGER.